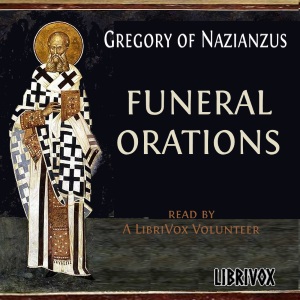 by
Gregory of Nazianzus

LibriVox recording of Funeral Orations by Gregory of Nazianzus. (Translated by C. G. Browne; James Edward Swallow.)
Read in English by A LibriVox Volunteer
Gregory the Theologian, also known as Gregory Nazianzen (which name also refers to his father,) was a 4th-century Archbishop of Constantinople. He is widely considered the most accomplished rhetorical stylist of the patristic age. Along with the brothers Basil the Great and Gregory of Nyssa, he is known as one of the Cappadocian Fathers. Gregory is a saint in both Eastern and Western Christianity. In the Roman Catholic Church he is numbered among the Doctors of the Church; in Eastern Orthodoxy and the Eastern Catholic Churches he is revered as one of the Three Holy Hierarchs, along with Basil the Great and John Chrysostom. He is also one of only three men in the life of the Orthodox Church who have been officially designated "Theologian" by epithet, the other two being St. John the Theologian (the Evangelist), and St. Symeon the New Theologian. (Summary adapted from Wikipedia.)
For further information, including links to online text, reader information, RSS feeds, CD cover or other formats (if available), please go to the LibriVox catalog page for this recording.